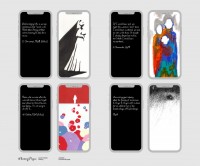 #VictoryPages is the versatile social media documentary commemorating the 75th anniversary of the defeat of Nazi Germany. It is a story of Victory told by the young for the young, using the tools and language of digital media over five social networks, employing visual art, interactive formats, 3D animations, Virtual & Augmented realities and dynamic real-time storytelling. The objective behind the project - is not only to commemorate the veterans, but to also remind what a terrible price the world has paid for the most deadly war in history.

We are an Emmy-nominated digital in-house team within the international news network RT available in 6 languages across 100+ countries.At RT Creative Lab we believe in the power of good stories. A good story is the core of every great execution. But when it comes to digital deciding what kind of story you want to tell is inseparable from HOW you are going to tell it. That’s why we always focus not only on exquisite narratives but also on innovative digital craft. We strongly believe that the appropriate combination of these 2 elements can change the world for good.